Ascent to the Bayren Castle, Gandia

In less than an hour's leisurely walk along the orange orchards, I found myself at the foot of a cliff with ancient walls visible on top.

Through a telephoto lens, you can clearly see that this is a rectangular structure, and it does not look like a fortress at all. 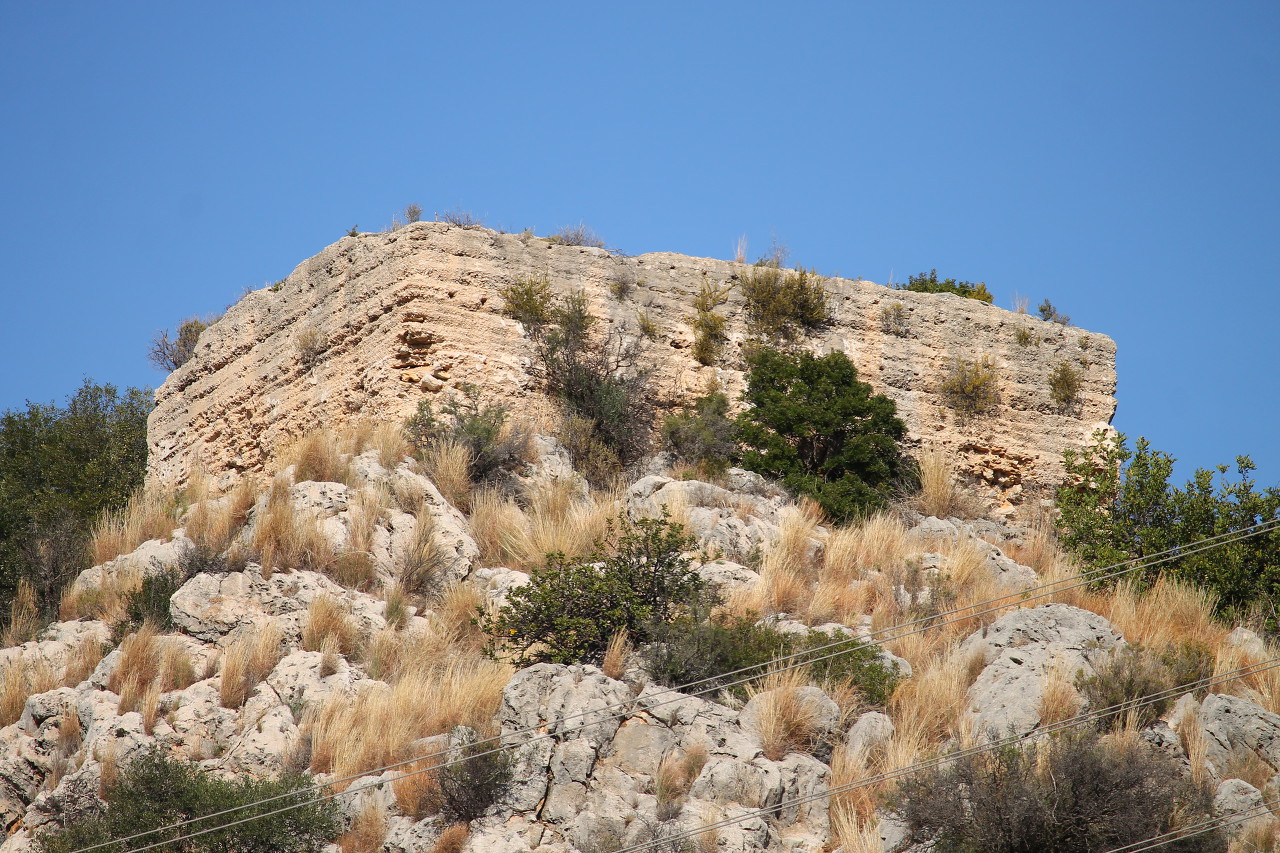 Here begins a stony path, which is still very gentle. 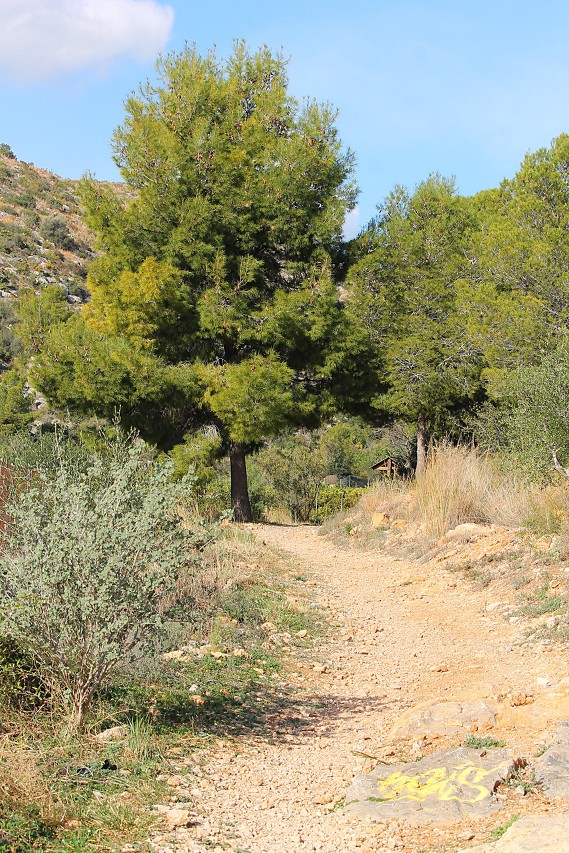 In the shadow of a tall pinya, I saw fresh masonry and sacks of cement. You can see that the path is being improved. 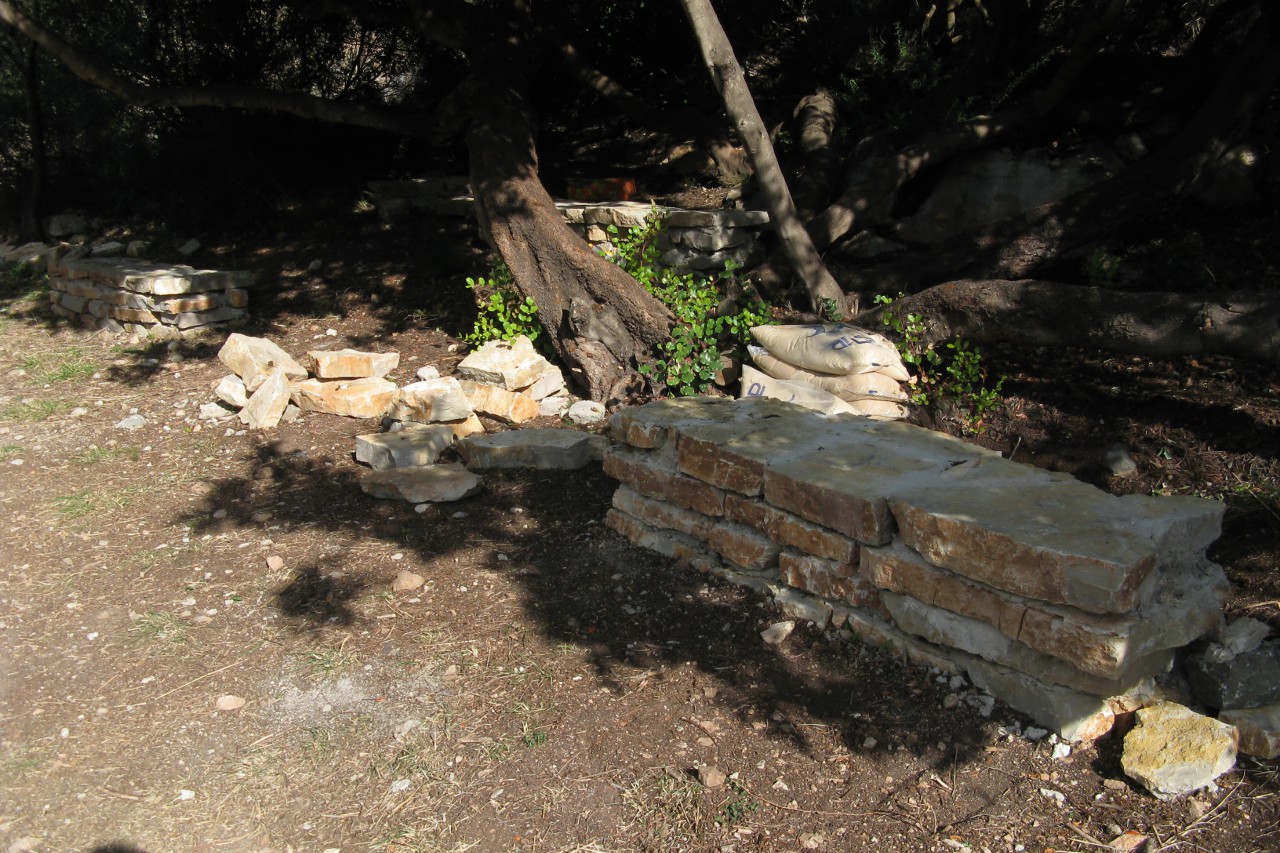 Butterflies bask on the stones covered with needles. It's January 8, but it's really hot in the sun. 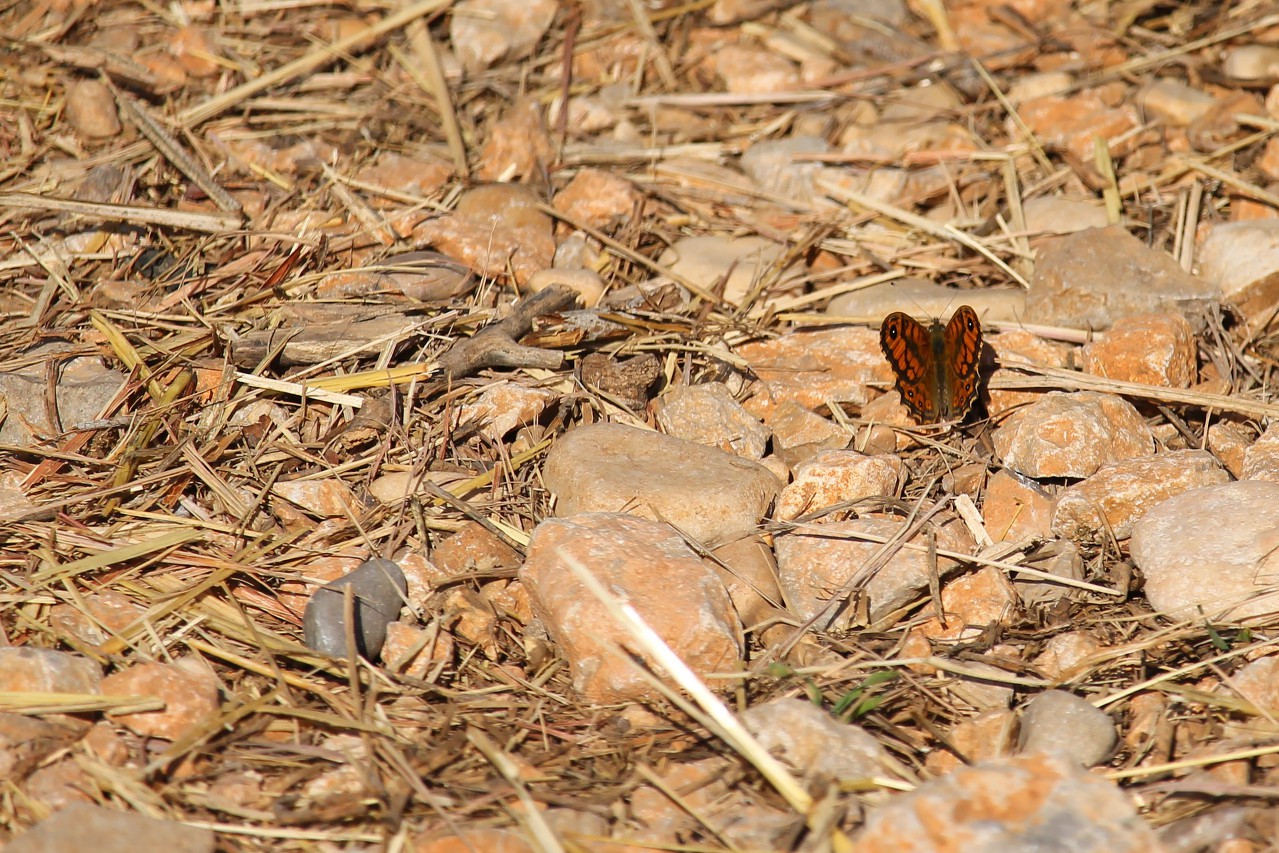 On the left are the same endless orange plantations. 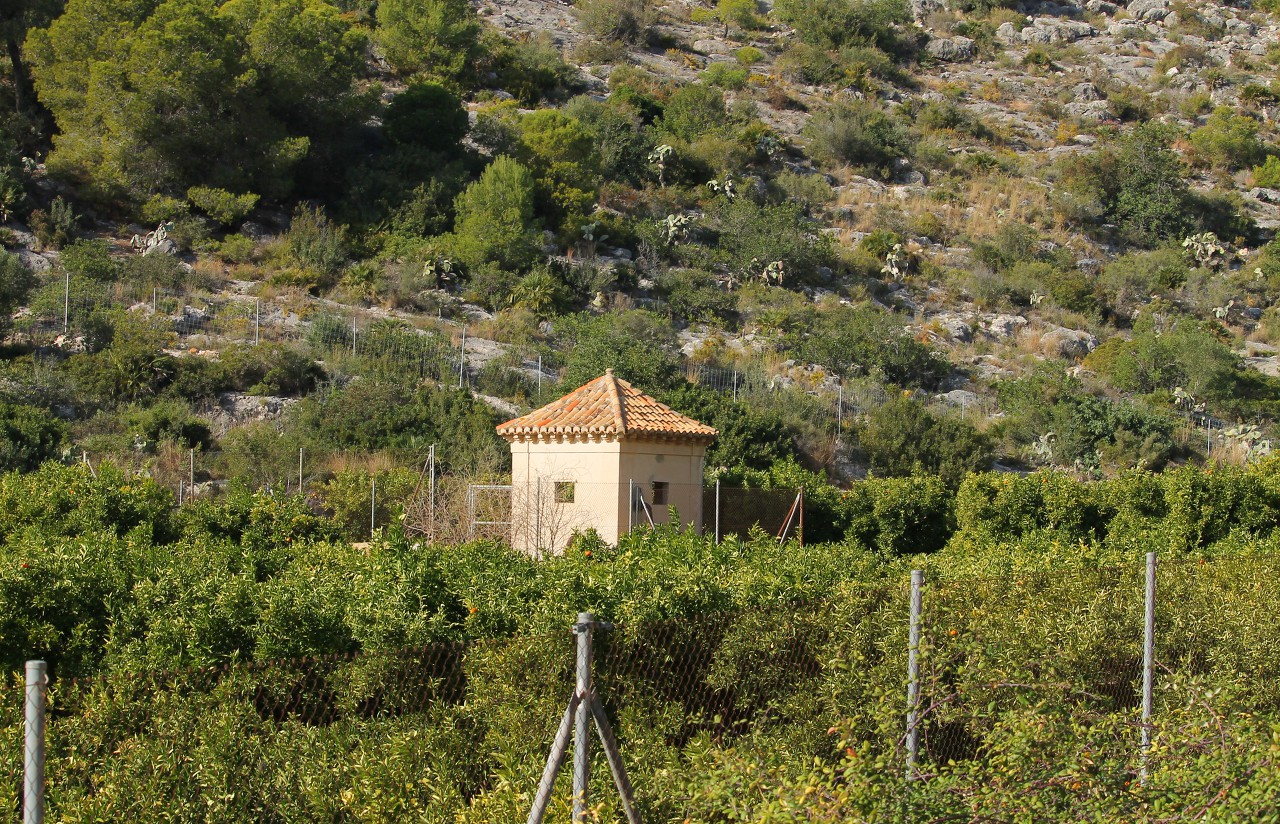 To the right is a mountain slope with ruins at the top, it seems that I am not going there at all, but only moving away from them. 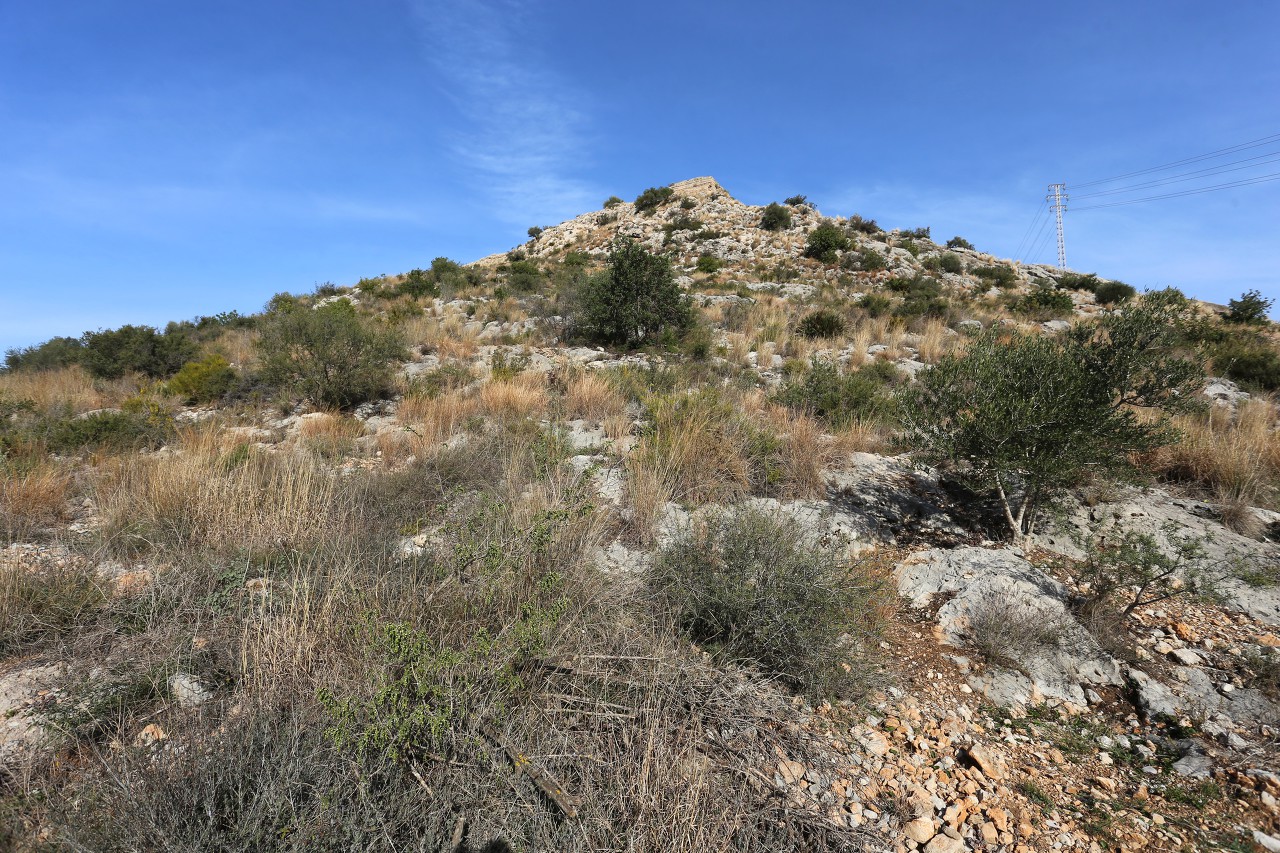 After a while, the road is blocked by a powerful metal gate, then you can only walk or bike. There is a sign nearby that it is not recommended to go there, since the road to the fortress is still in the process of repair and improvement. But how can this frighten a real tourist? 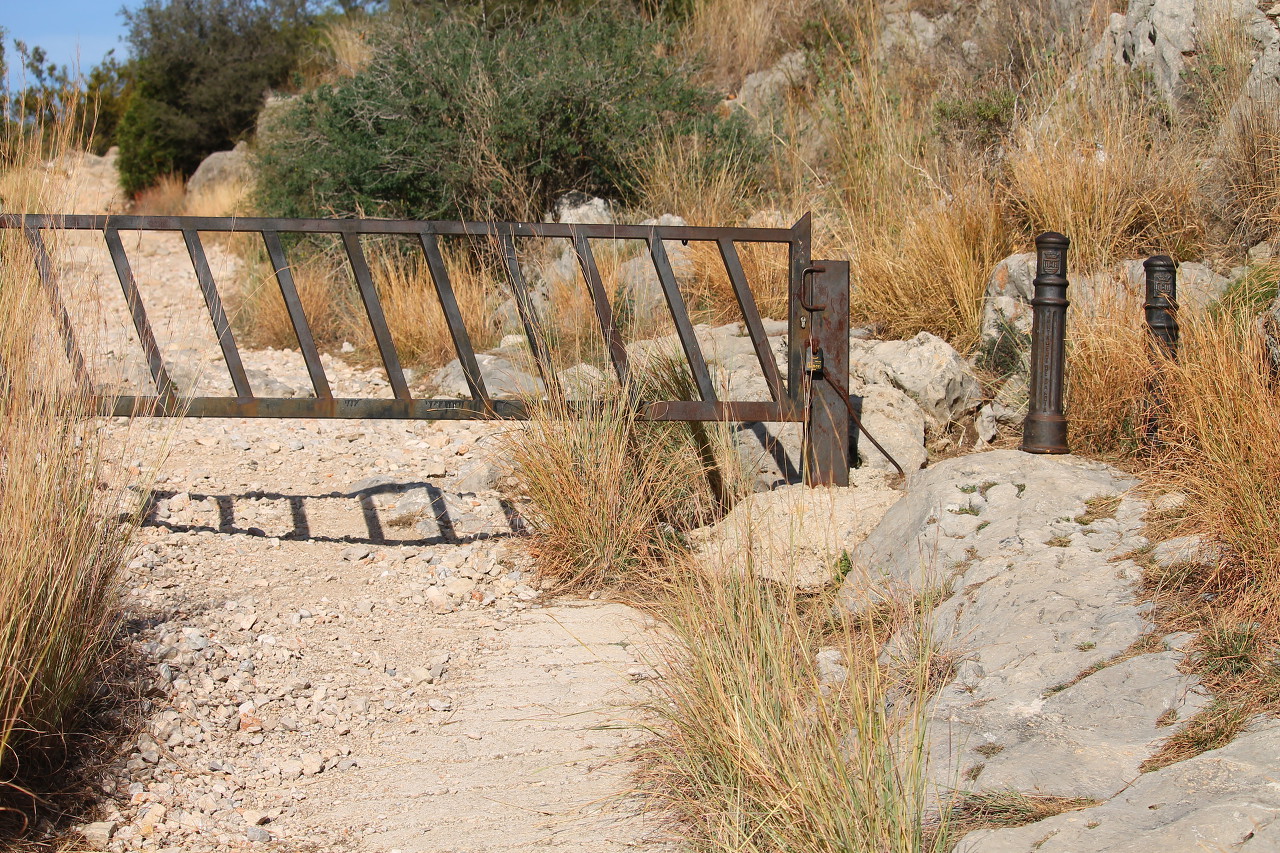 The path runs along the side of the mountain with a slight rise. 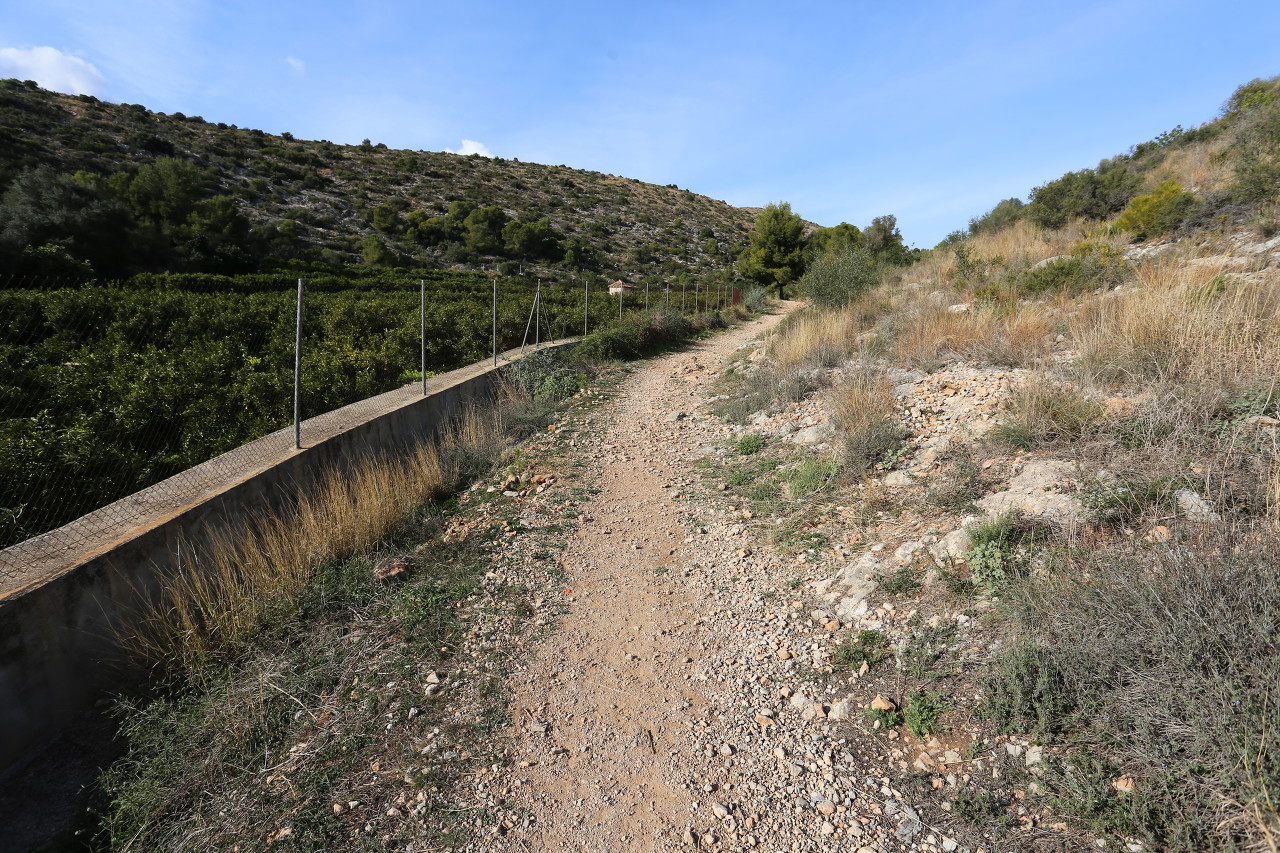 The ruins above were completely out of sight. 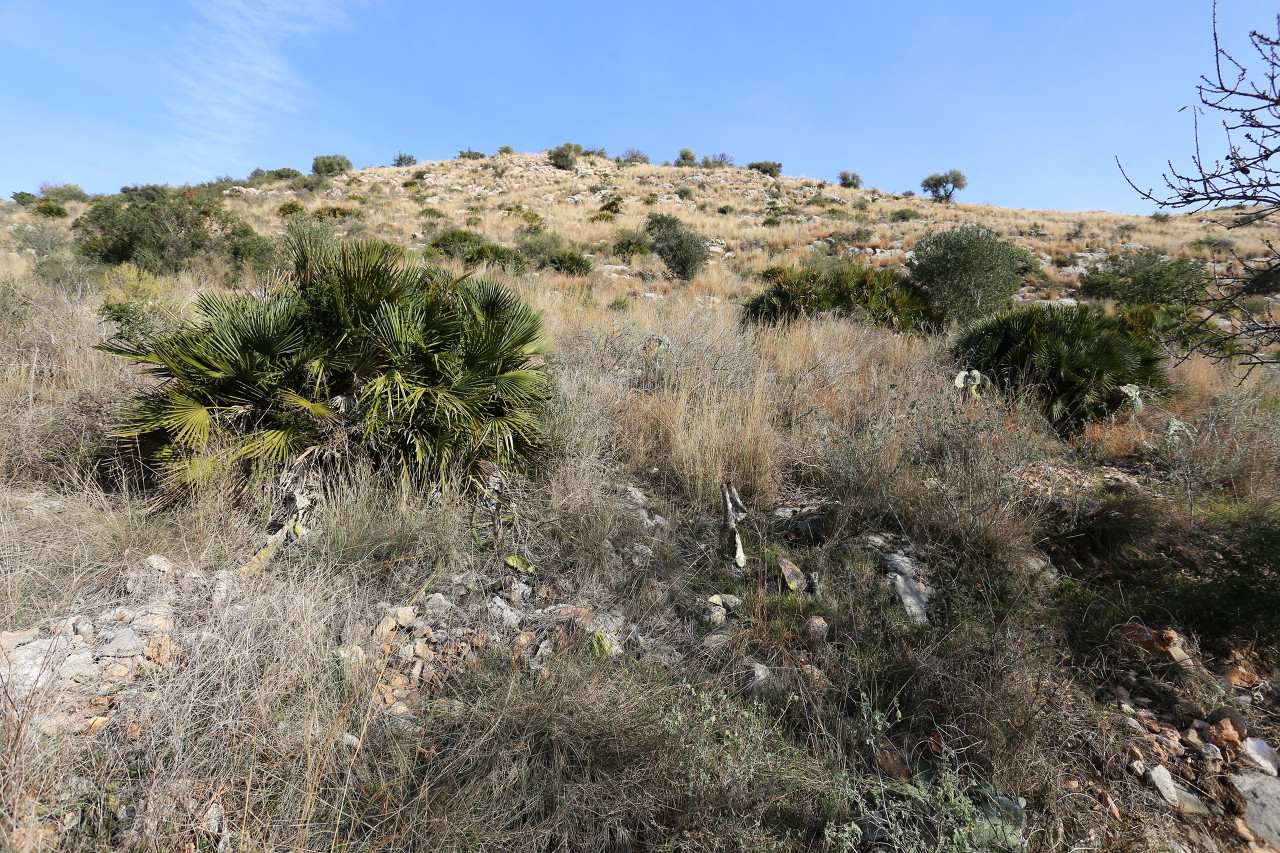 On the slope to the right I saw a stone structure with sticks sticking out of it, and above it another one that looked like a watchtower. 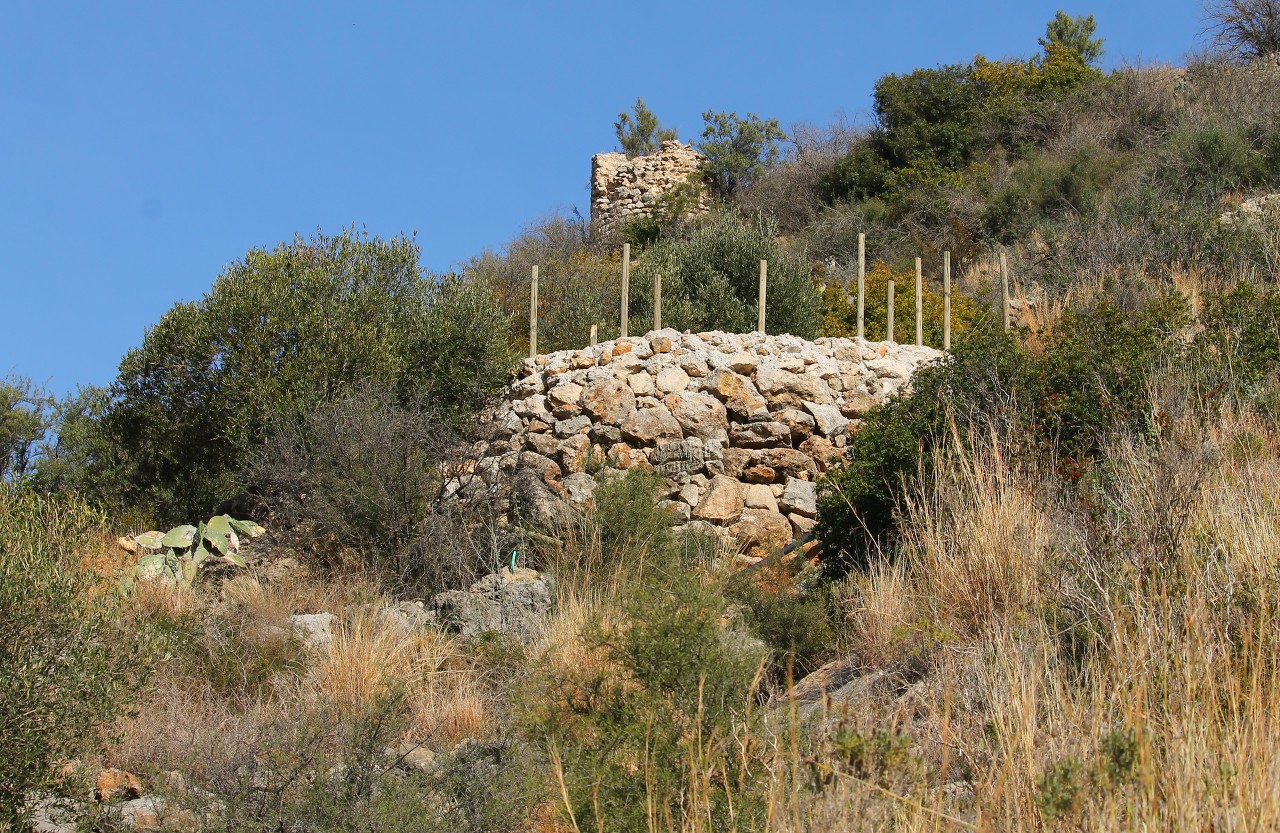 After a few steps, the path turned sharply, and I realized that I was walking along a mountain serpentine. The turn, I must say, is quite unsafe and over a steep cliff, fenced only by low triangular stones.

The structure with sticks turned out to be a recreation area, which is in the process of completion. 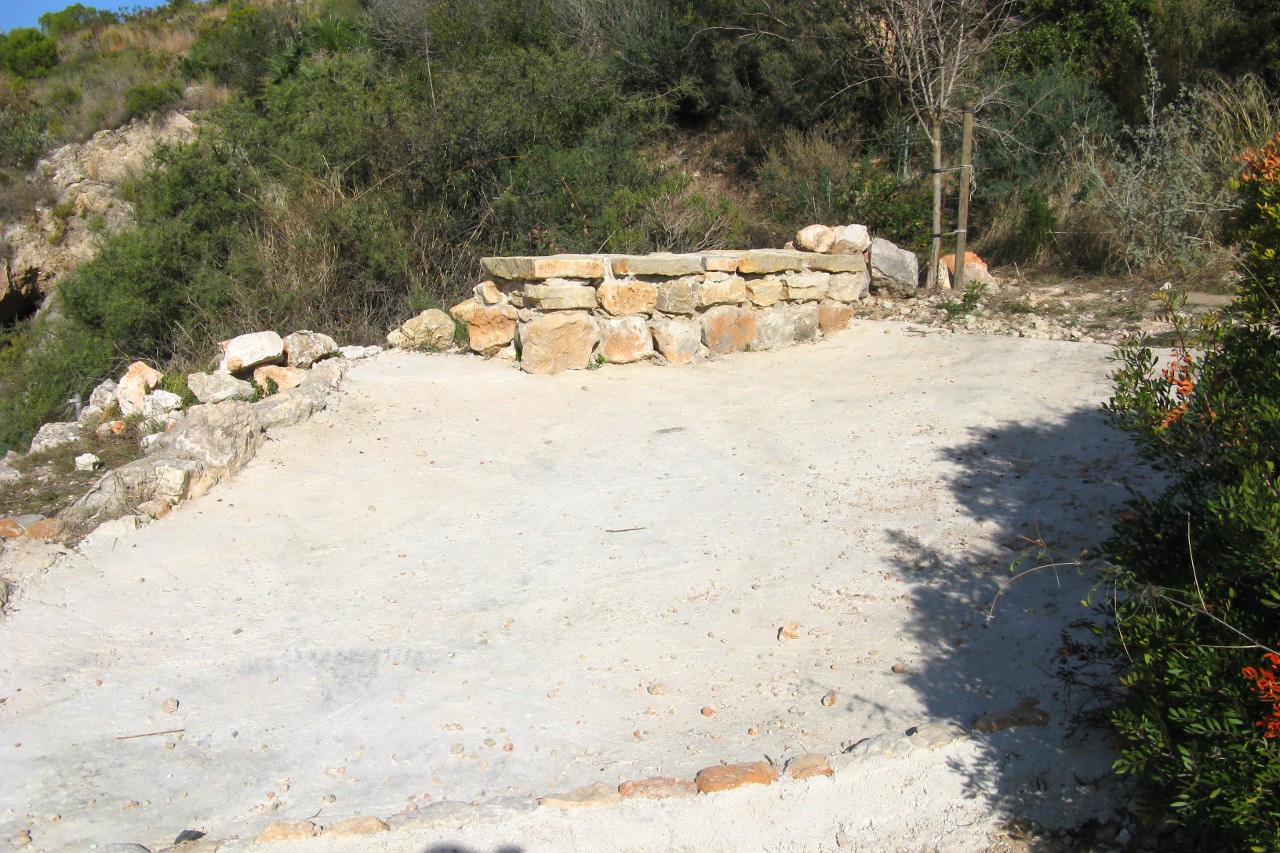 The platform offers a view of a cave in the mountainside. There is a path leading to the cave, but it is located in a fenced area. 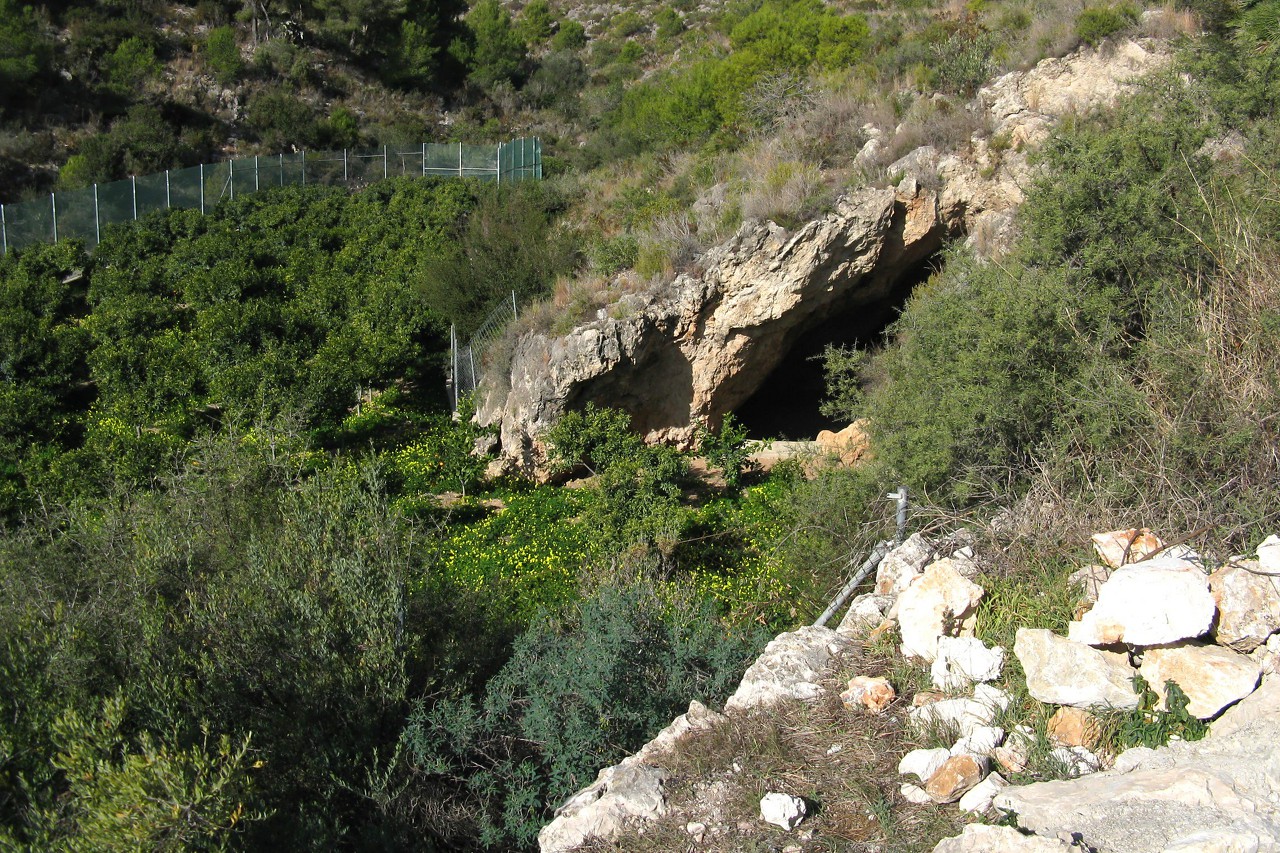 The road goes along the cliff and becomes steeper. 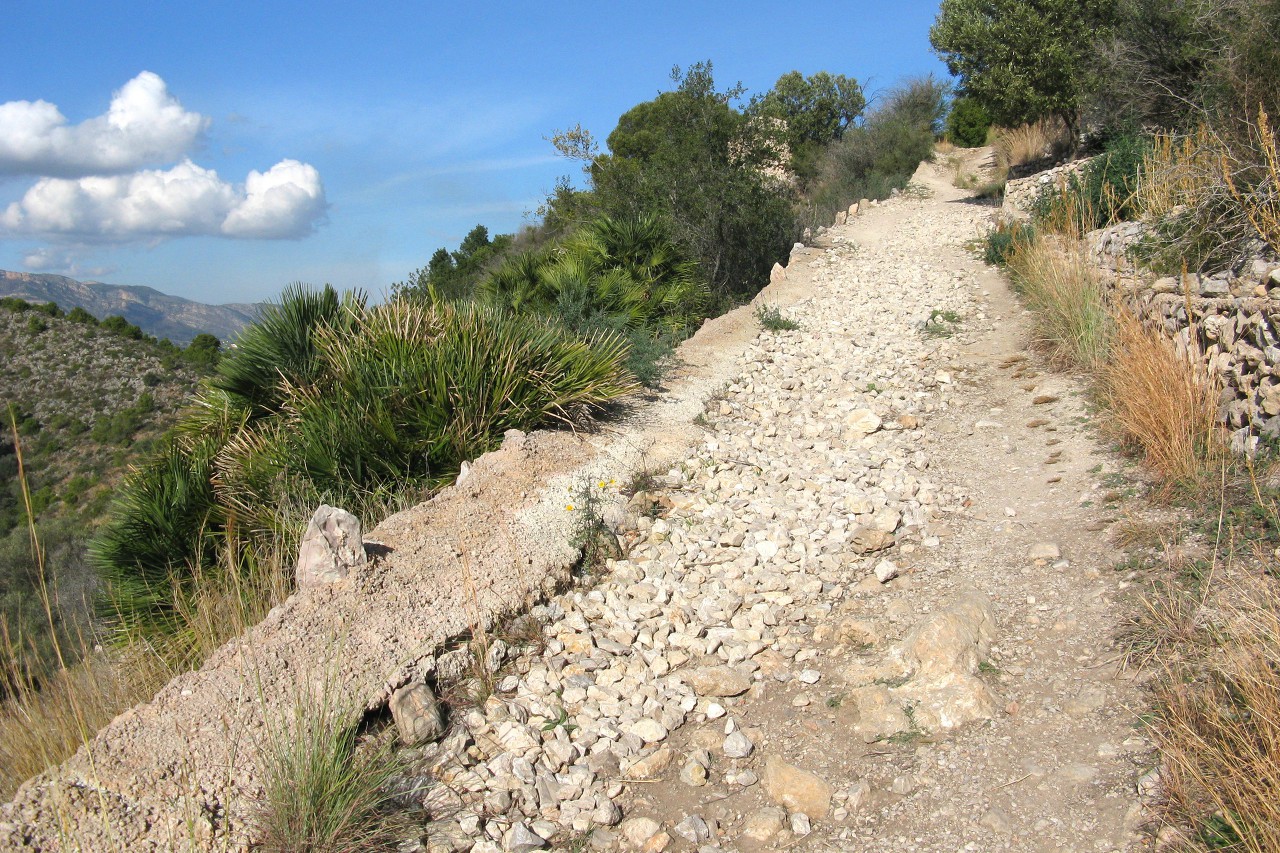 But at the top of the slope you can see something resembling a fortress. 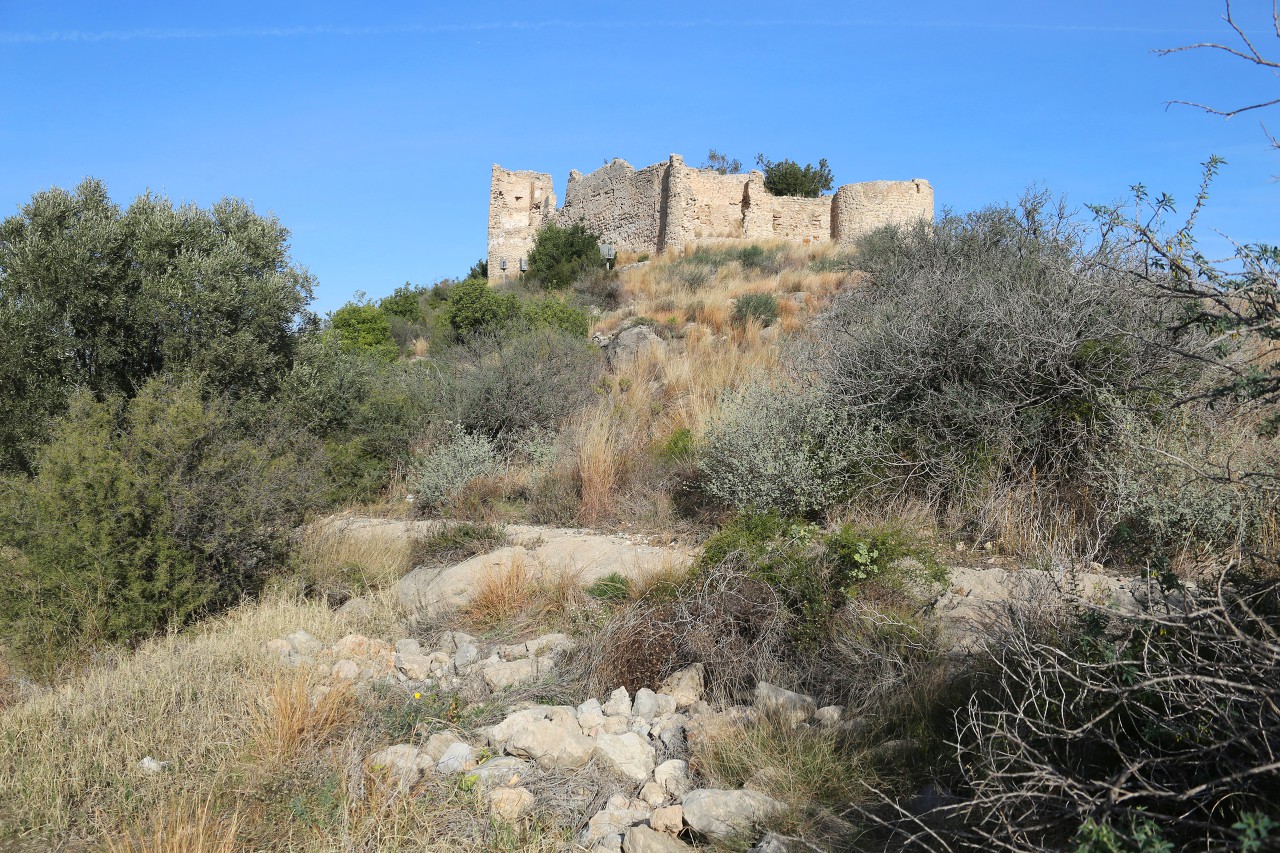 Then begins a large gravel and walking in shoes with soft soles is not very comfortable. 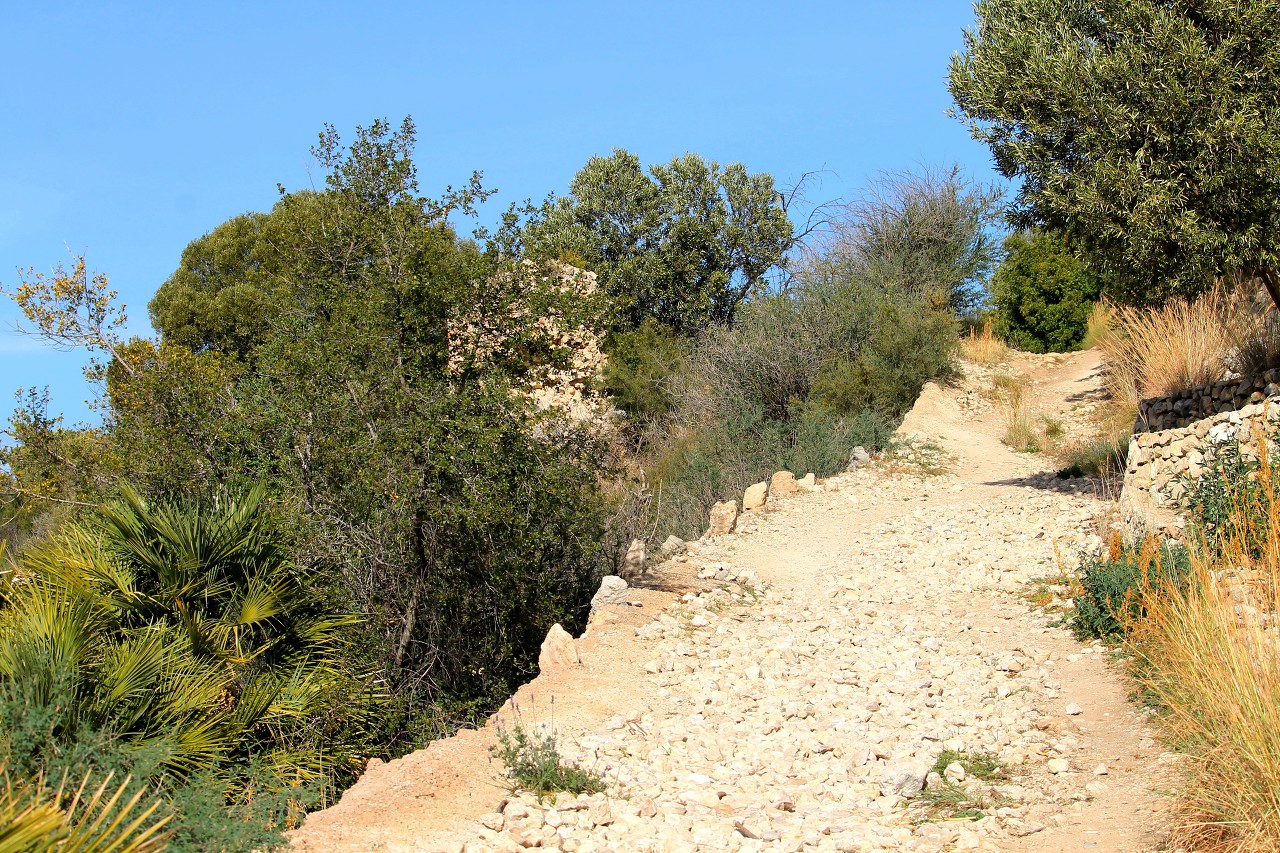 At the top is another platform, located on the next knee of the serpentine, if you want to go up the slope, taking a shortcut, but I did not do this.

There is another turn and a recreation area ahead. 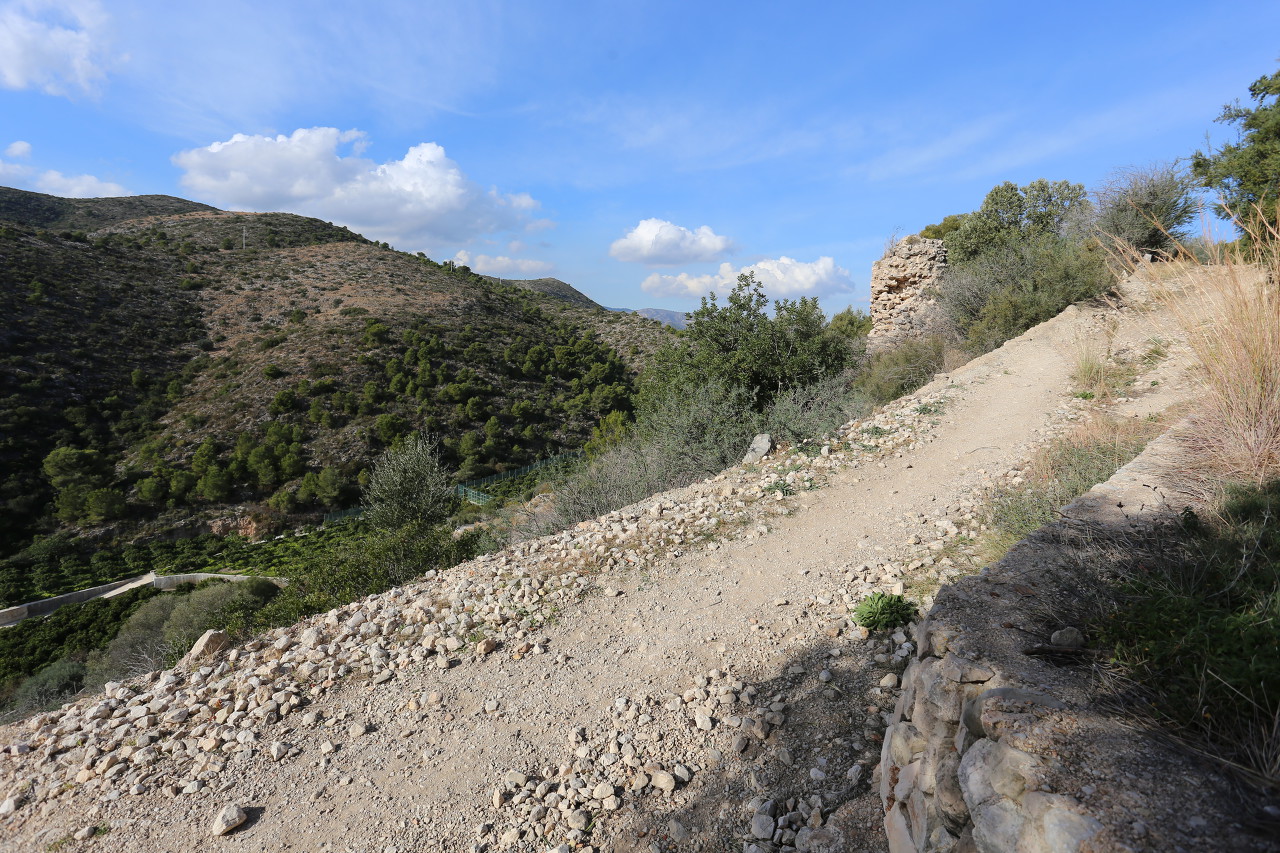 Here I took a deep breath and looked around. The orange orchards were far below. 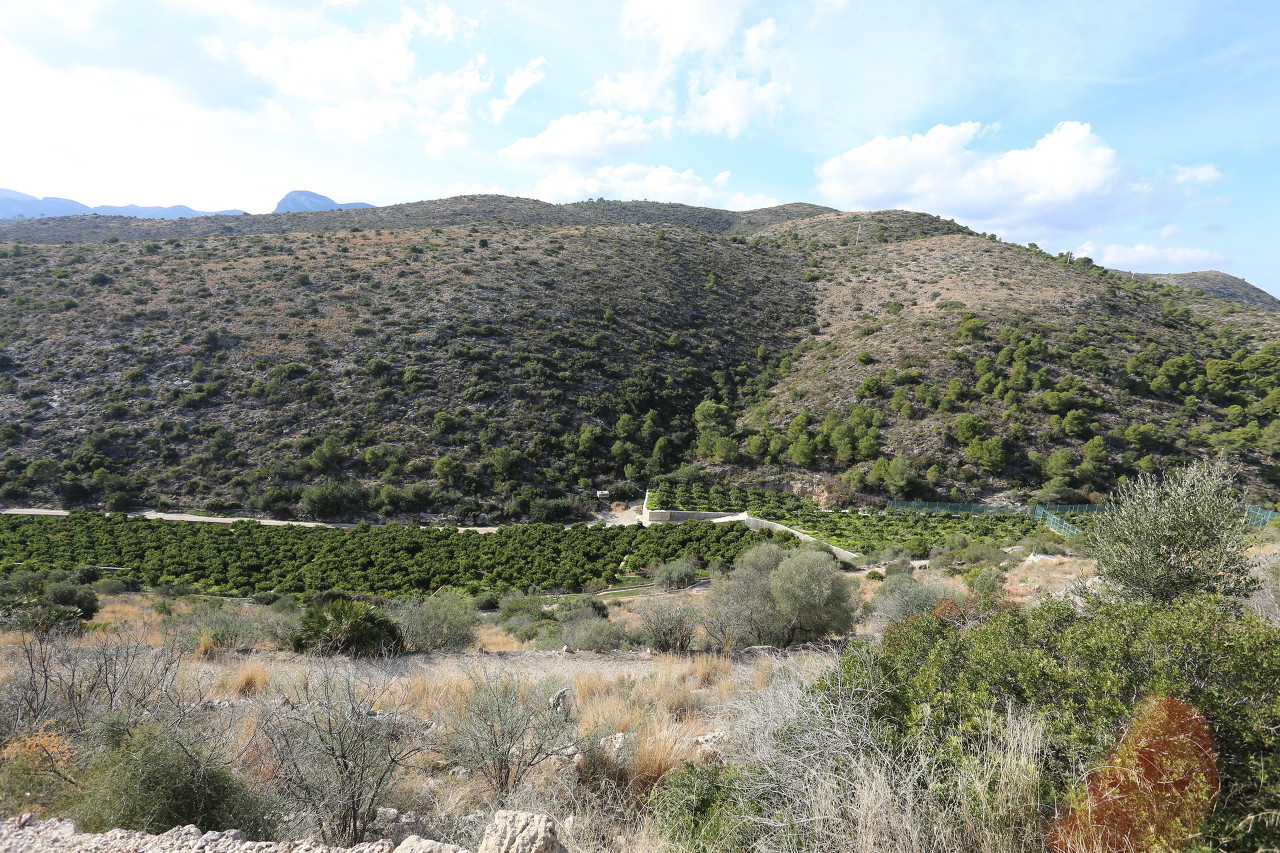 I looked back at the section I had passed and realized that the sign at the entrance was not hanging for nothing. By the way, during the entire trip to the fortress, I did not meet more than one person.

Most annoying stone chips, which can easily lose your balance. I tried not to think about what to do if, say, you turn your leg. So I don't recommend climbing alone, at least not until the trail is completed. 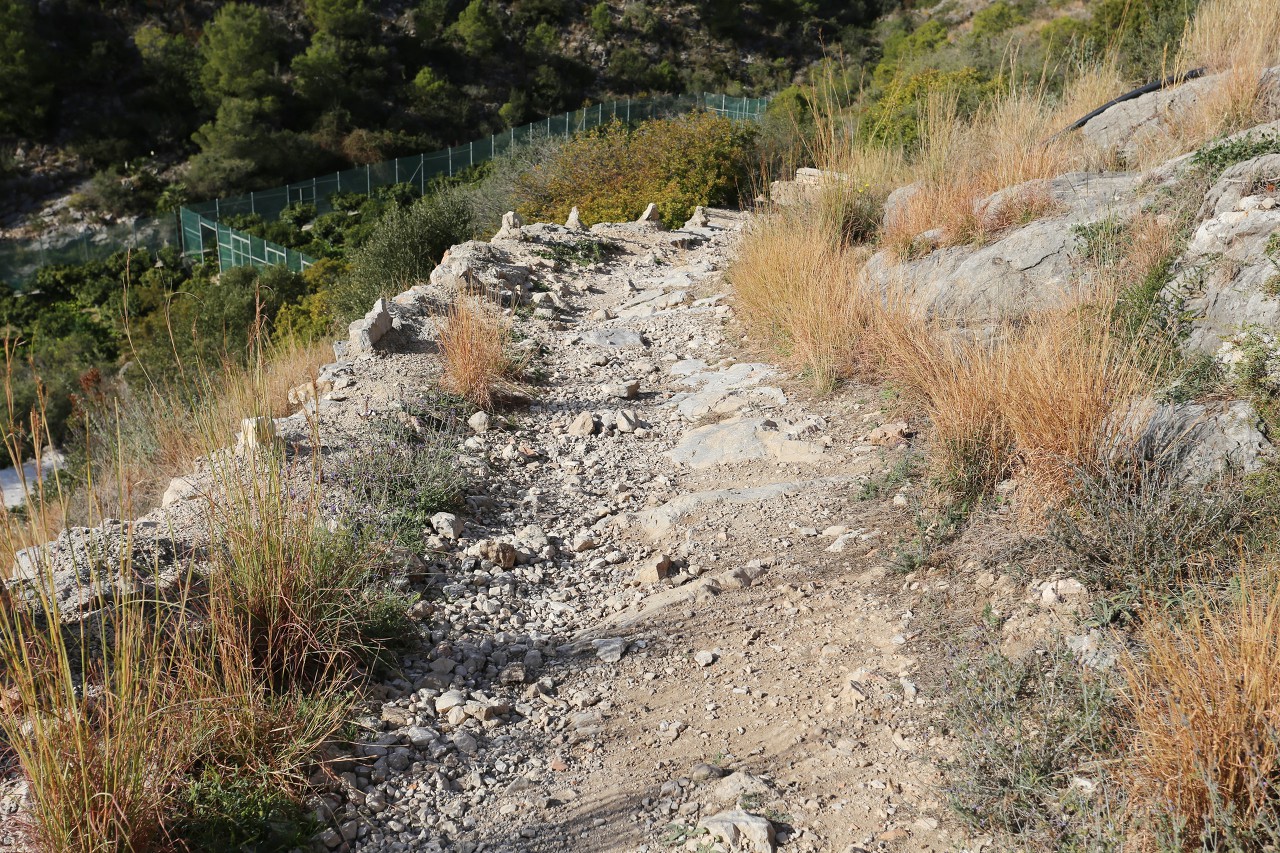 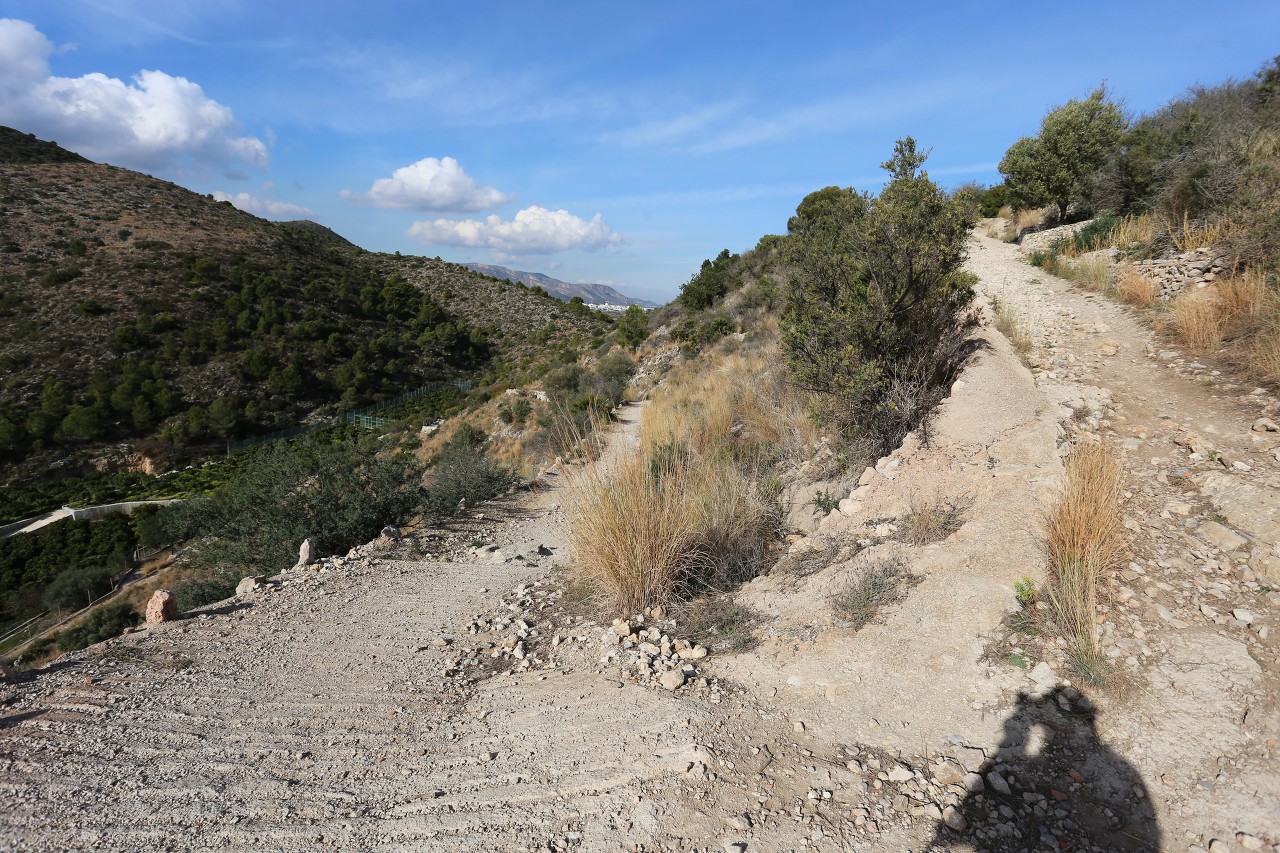 From here you can already see Gandia, before it was hidden by a mountain. 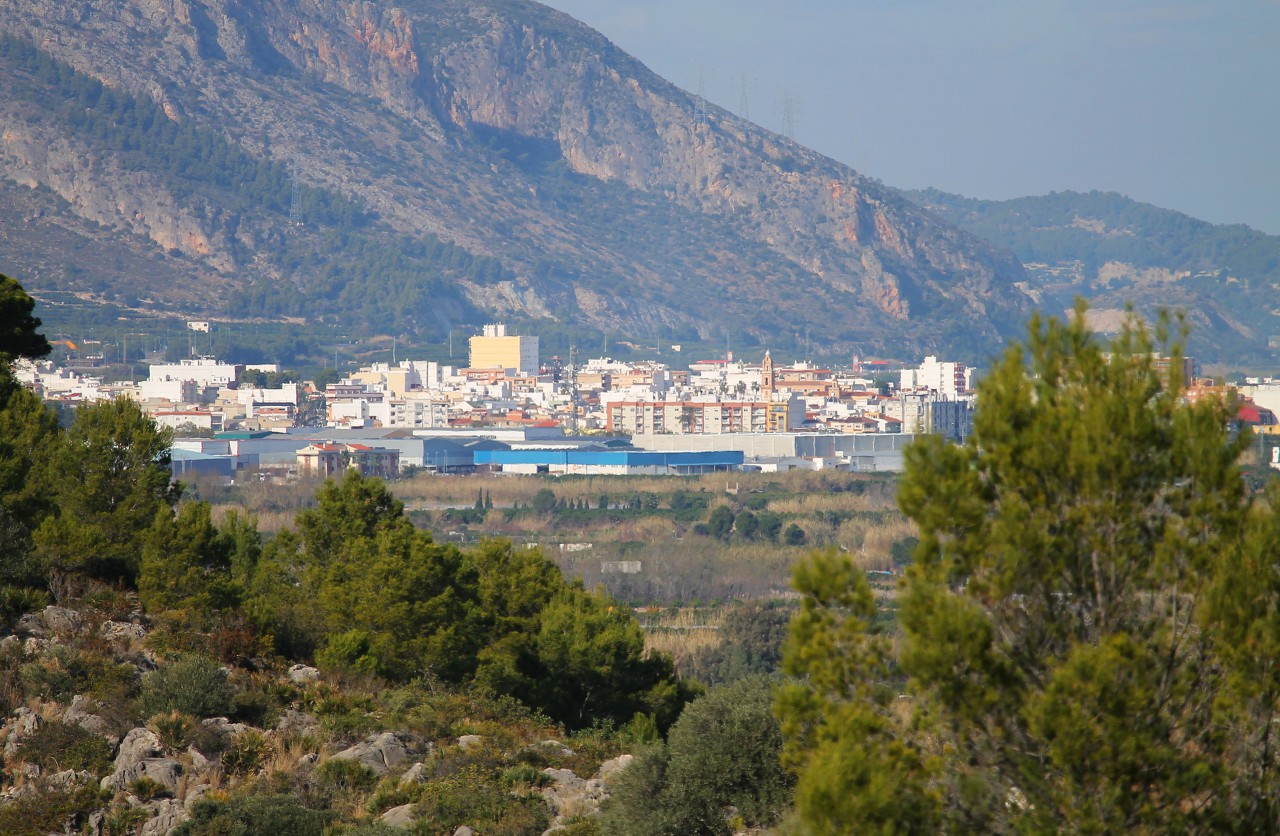 A pipe similar to a sewer is laid up the slope, which indicates that serious infrastructure is planned in the fortress. 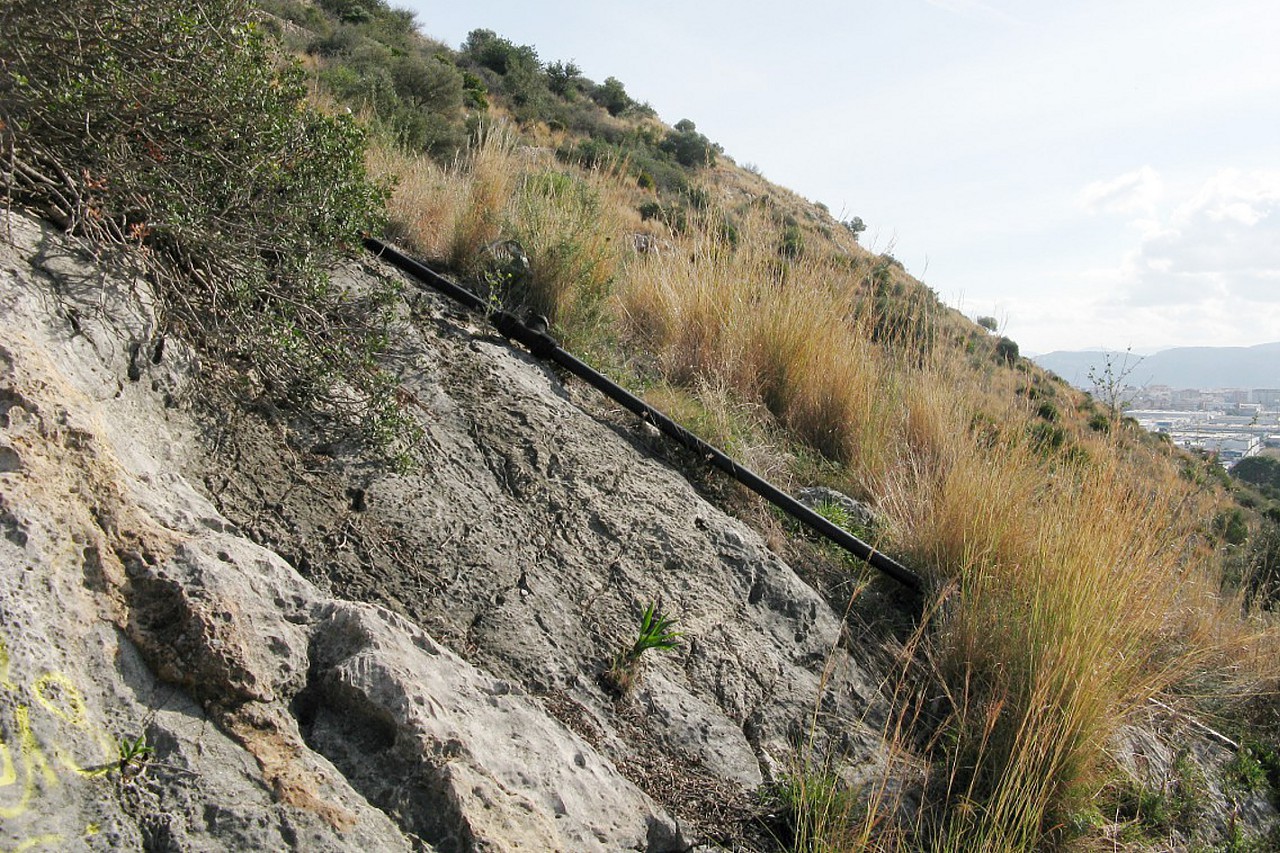 In places, you can see the remains of some buildings. 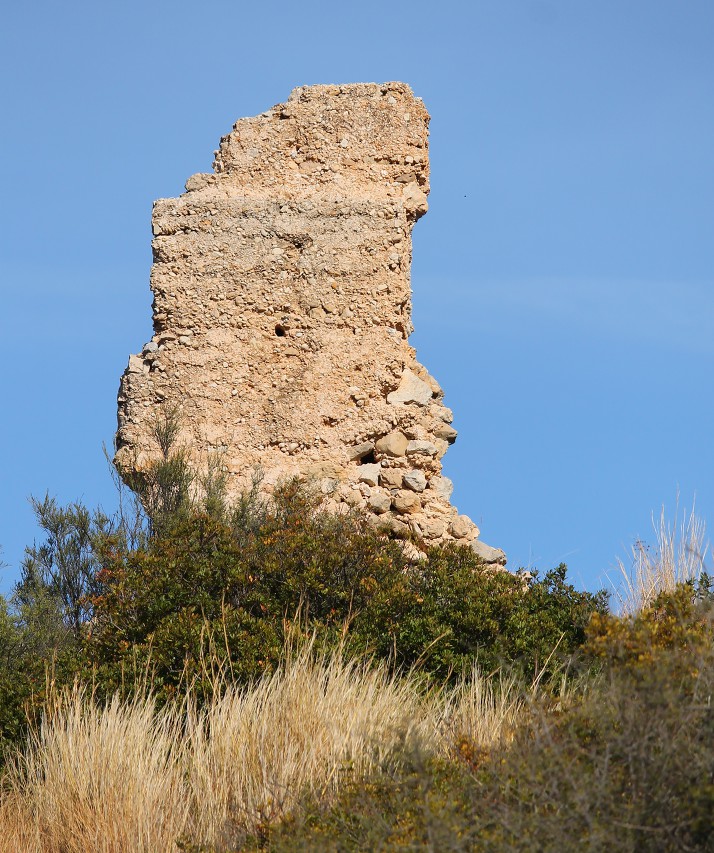 The road still runs along the cliff, along which in places stick out stone teeth. 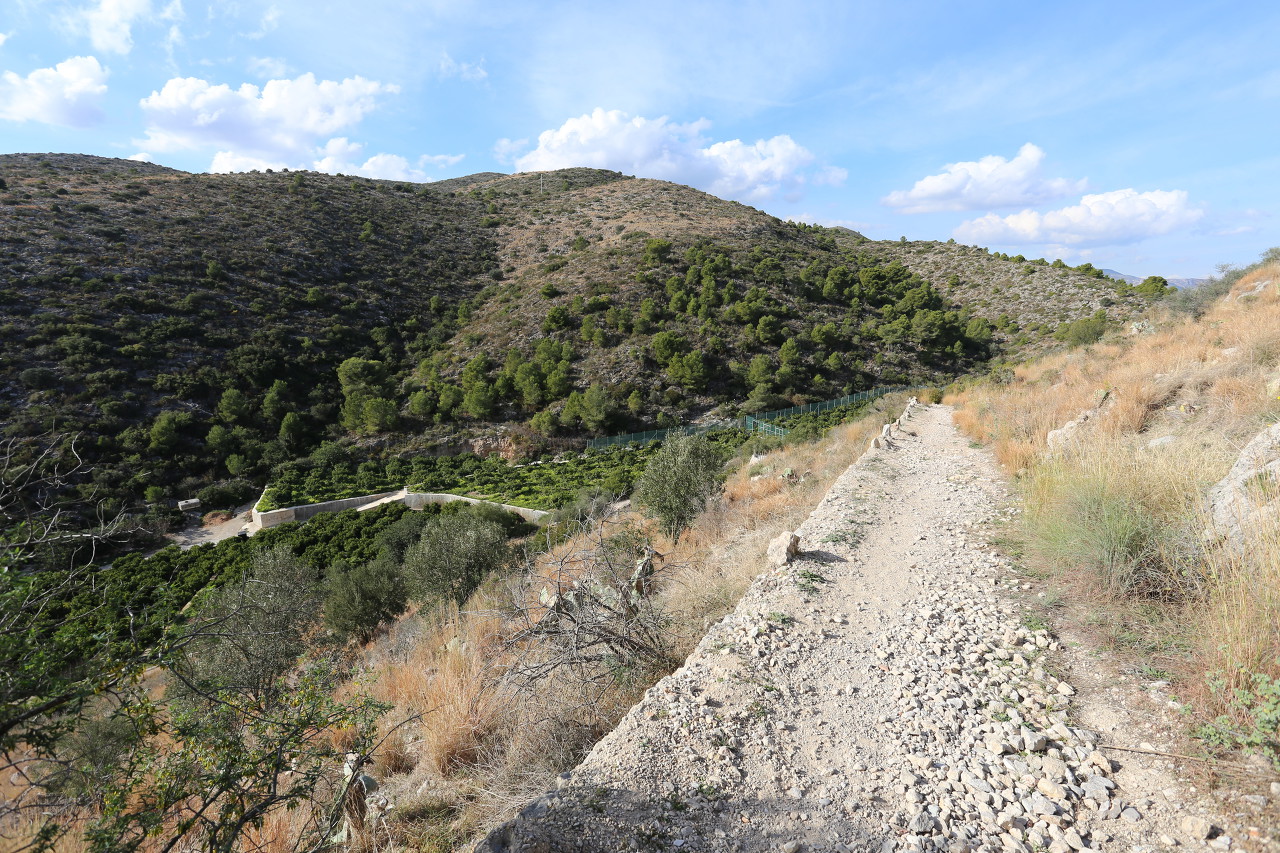 These" dragon's teeth " medieval fortress builders dug for safety - they are made of light stone and in the dark show where the cliff is. 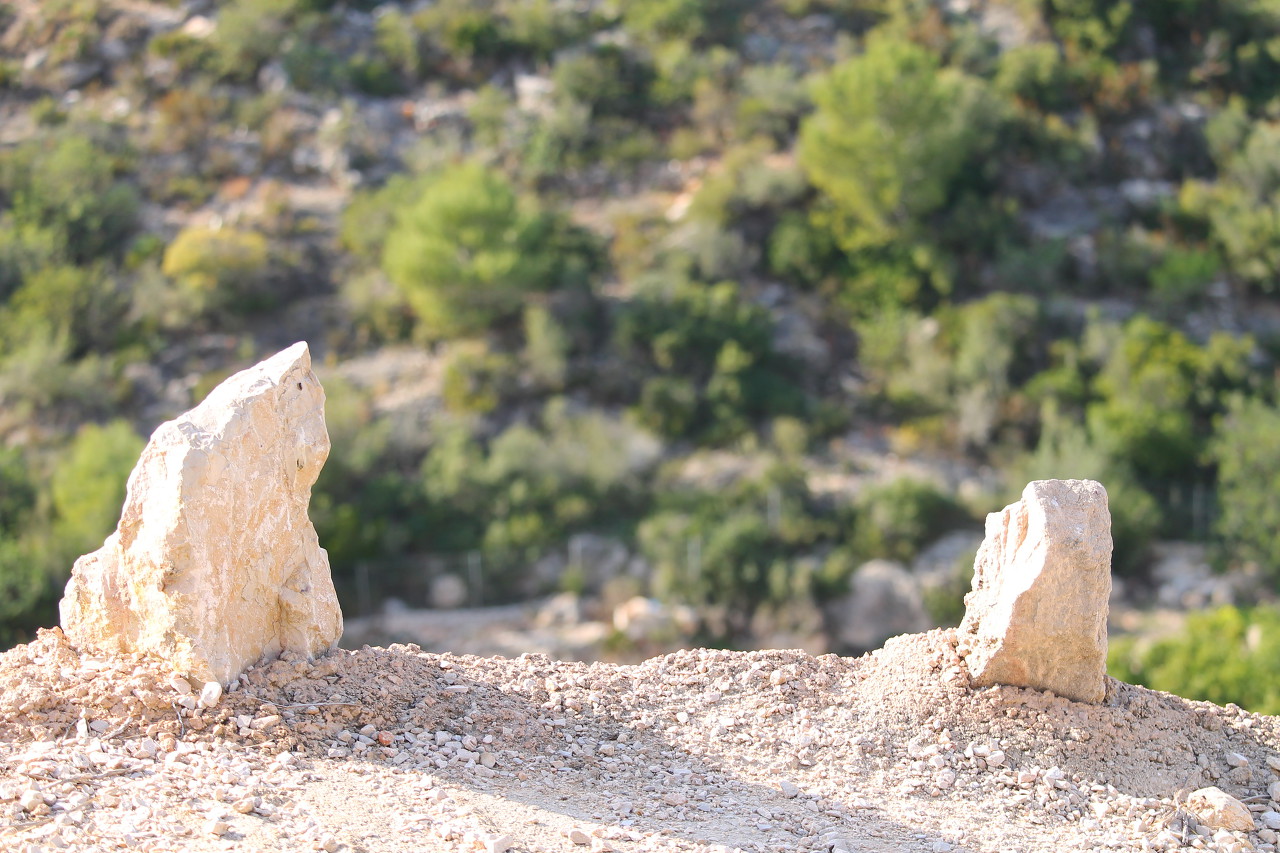 Here is a completely different view, towards the sea. 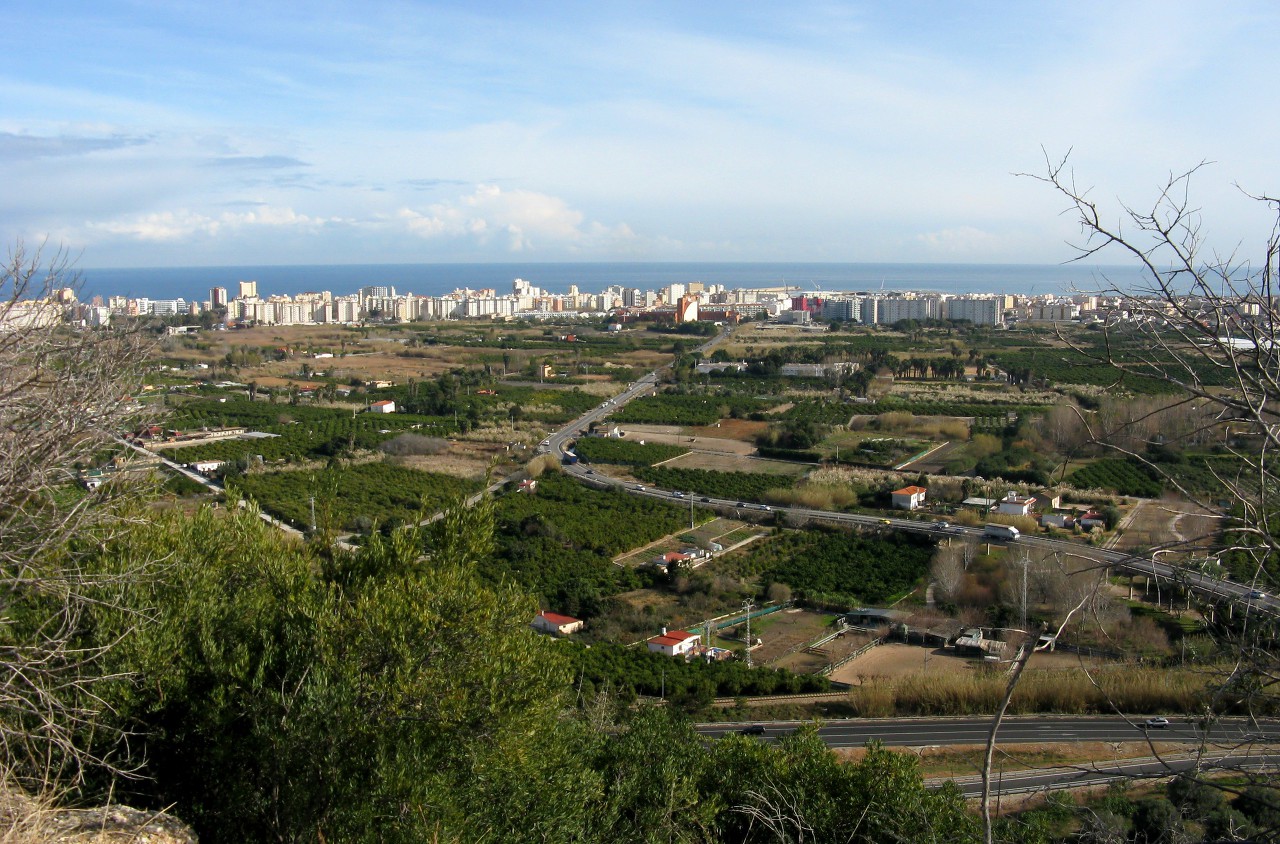 Well, I'm finally at the walls of the fortress. Sport-tracker showed that the ascent took exactly half an hour, I walked along the trail for about 1200 meters and climbed 80 meters (map). 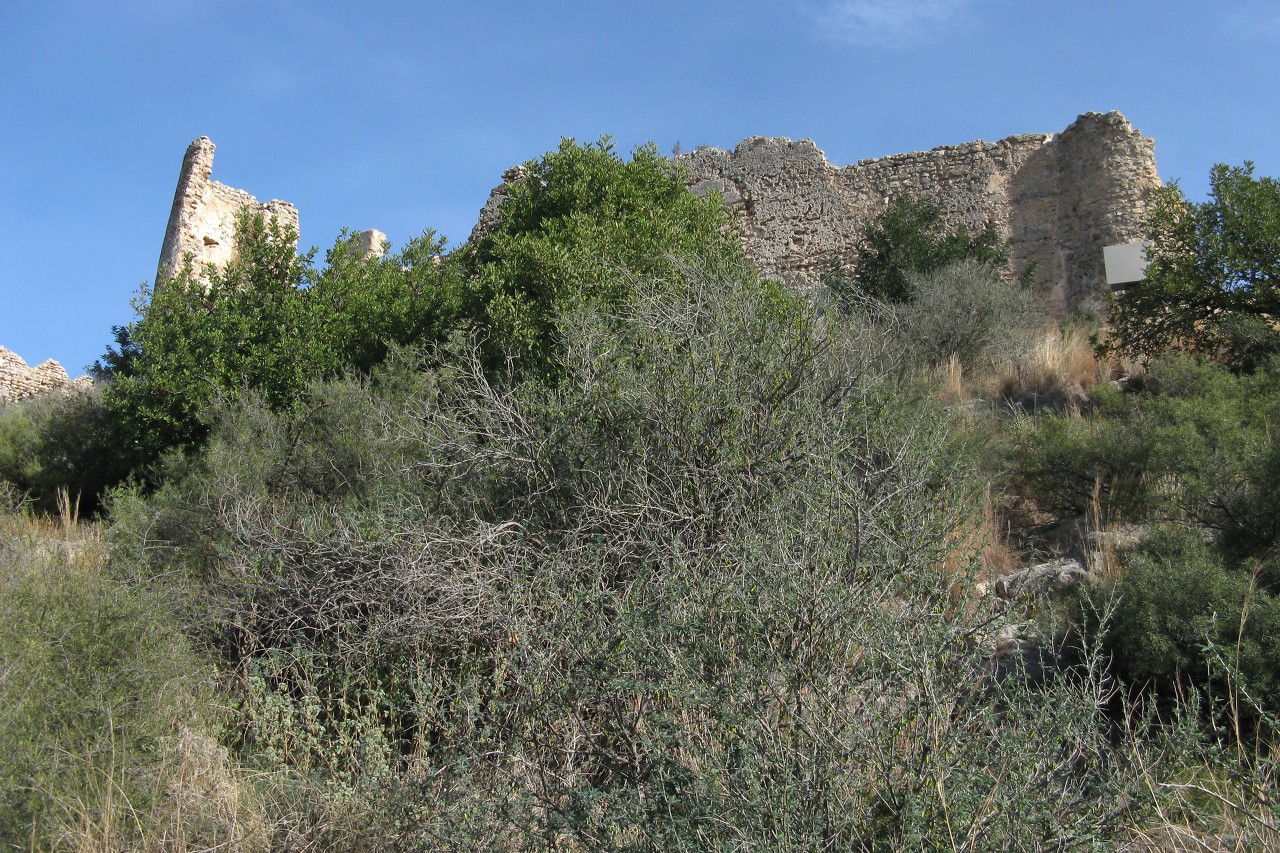